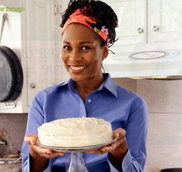 "Fighting foreclosure one cake at a time."
That's how it all started.  Well sort of.  Her story really started as a child when Angela learned to love all-natural aromatic cake baking with her grandmother when she was 5 years old. Her apple cake was inspired by a woman from Kansas, but Angela made it her own by upgrading the recipe using natural ingredients.  From there she created three other specialty cakes; apple rum upside down cake made with three kinds of apples, the apple pound cake made with Ghiraridelli's white chocolate dizzle, and the caramel apple cake made with slow cooked caramel.


For years, she baked her apple cakes.  She baked them for school and church bake sales and other charitable events.  Everyone, family and friends, raved about them.

Her story became really dramatic when she was faced with the foreclosure of her home of 20 years.  To save it, she needed to raise $2,500. She brainstormed and thought about selling her cakes. Her children told her to go for it!   So she set a goal to sell 100 cakes in 10 days to save her home. As word spread, the local paper ran a story about her. She received so many orders, that when the Hilton Hotel heard about her making one cake at a time at home, they offered her their commercial kitchen.  The organization Bake Me a Wish, was impressed with her story and offered her support to get the cakes made. End story, she raised enough money, saved her home and found a new career!

Although everything changed for Angela, one thing stayed the same: her love of baking apple cakes. She uses quality ingredients and whenever possible uses local apples. She especially likes Gala and Red Delicious apples and uses whole wheat flour, organic powdered sugar and spices and butter, cream cheese and pure vanilla.  Angela, a former dancer and actress, now bakes for a number of farmers' markets, restaurants and fulfills mail orders.
Website